meditations on the beautiful imperfect repeated cycles of life

This past Saturday evening I was fortunate enough to go see the dance performance 'Steve Reich Evening' at the Brooklyn Museum of Art http://www.bam.org/view.aspx?pid=115). It was choreographed by Anne Teresa Keersmaeker to the music of Steve Reich.
There is a part of me that does not want to even attempt to put words to this incredible performance for I know there is no way I could possibly do it justice. But in a vain attempt I will say the performance dealt with the repetition of sounds, movements, and objects. It was a meditation on the patterns of the imperfections inherit in life as well as the simplicity and power of the cyclical.
Overall, a beautiful and overwhelming experience encompassing stunningly beautiful sounds, movements, lighting, and messages. An example to me of finely tuned forms of impeccable art coming together and making vast statements while remaining sensually appealing. Both a heaviness in the strength of it all as well as a lightness as the dancers floated, glided, and elevated energetically across the stage.
Below are some images from the performance (which I did not take, it should be noted): 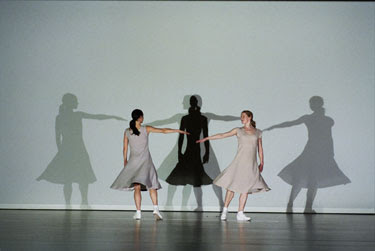 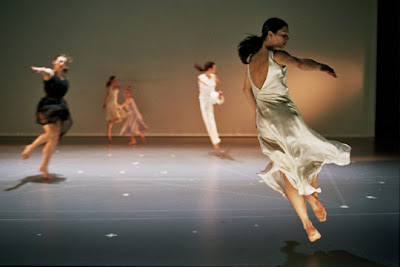 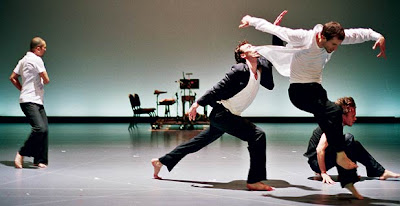 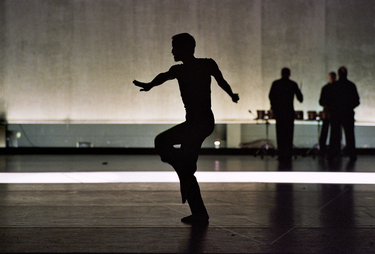 "Flying With One Engine" 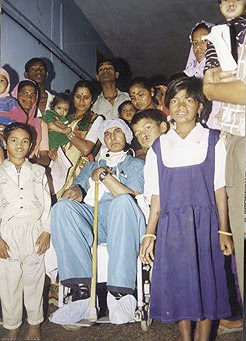 This past Friday evening I went to see a documentary being shown at the Tibetan museum called the Rubin Museum (http://www.rmanyc.org/index.xml?context=/), which on a side note, I highly recommend visiting. The film I saw was called 'Flying on One Engine' and was about an Indian doctor named Dr. Sharadkumar Dicksheet. There are many reasons why this man is special, other than the fact that he has now been nominated for the Nobel Peace Price eight times. He began his work as a plastic surgeon in the United States but after a car accident that left half of him paralyzed and a battle with cancer in his larynx as well as numerous other serious health conditions severely restricting his mobility and way of life he could no longer continue the life he once led.
For several years now, he has been living in Brooklyn on the money he receives from social security for half the year while he gets donors and medical supplies. He spends the other six months of the year in India performing thousands of free surgeries on Indian children, most of whom suffer from cleft lips.
He works 12 hour days during this time without any break and on a good day can perform 70 cleft lip surgeries in one day in an assembly line format.
He chooses his patients carefully, only those whose operation is simple enough to take one surgery. Something important he said was that he knew his limitations. His surgeries are only aesthetic but by just giving the child an physical appearance with less of a distinct physical deformity raises their chances at leading a normal life in a society that does not make an easy on someone who looks dramatically out of place. He also chooses to perform the surgery on more girls than boys as to give the girls a better chance at life because females with the cleft lip are much less likely to be able to marry and thus leading to a high probability of leaving them destitute later on in life.
Something else I began to wonder about during the film was how and why one is born with a cleft lip. After doing some wikipedia research, I found that a cleft lip is formed while a baby is still on the womb and developing. During the first two months of pregnancy, the shape of the embryos head is formed by five tissues coming together and if these tissues fail to meet a gap appears, thus causing a cleft lip.
"The cause of cleft lip and cleft palate formation can be genetic in nature. A specific variation in a gene that can have abnormalities causing the Van der Woude Syndrome increases threefold the occurrence of these deformities has been identified by Zucchero et al in 2004[7] as reported by the BBC.[8]

Environmental influences may also cause, or interact with genetics to produce, orofacial clefting. Some environmental factors that have been studied include: seasonal causes (such as pesticide exposure); maternal diet and vitamin intake; retinoids- which are members of the vitamin A family; anticonvulsant drugs; alcohol; cigarette use; nitrate compounds; organic solvents; parental exposure to lead; and illegal drugs (cocaine, crack cocaine, heroin, etc).

If a person is born with a cleft, the chances of that person having a child with a cleft, given no other obvious factor, rises to 1 in 14. Research continues to investigate the extent to which Folic acid can reduce the incidence of clefting.

In some cases, cleft palate is caused by syndromes which also cause other problems. Stickler's Syndrome can cause cleft lip and palate, joint pain, and myopia. Loeys-Dietz syndrome can cause cleft palate or bifid uvula, hypertelorism, and aortic aneurysm. Cleft lip/palate may be present in many different chromosome disorders including Patau Syndrome (trisomy 13). Many clefts run in families, even though there does not seem to be any identifiable syndrome present." (http://en.wikipedia.org/wiki/Cleft_lip_and_palate)

That said, I highly recommend the film if you should have a chance for not only is it an interesting story about an interesting man, it is also a very well done documentary.
Flying With One Engine
http://www.flyingononeengine.com/
Posted by souly nomadic at 9:20 PM No comments: